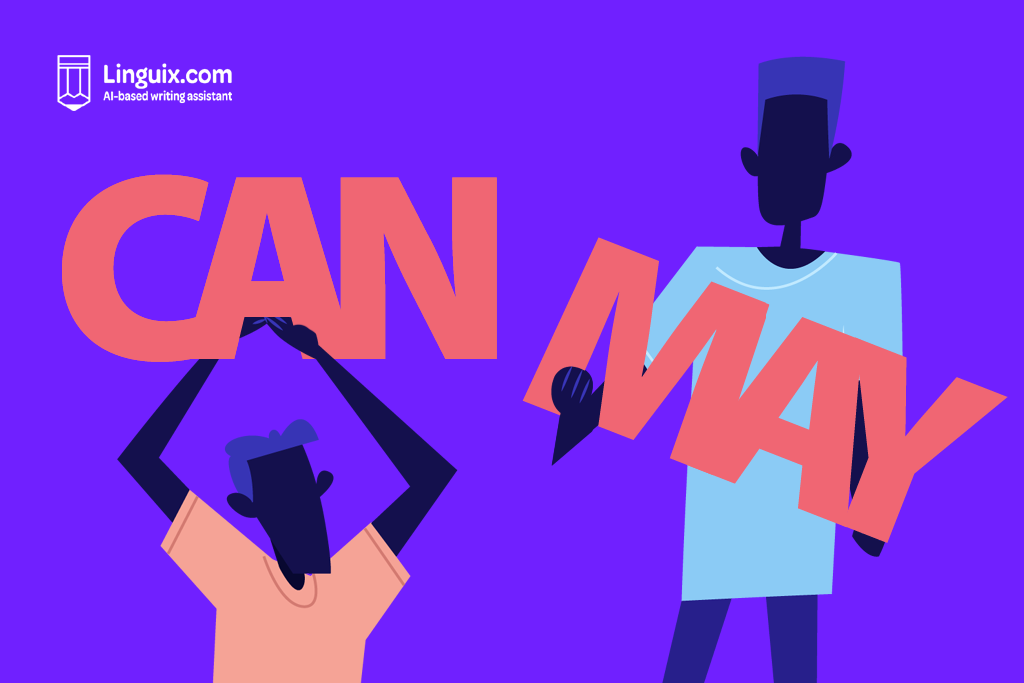 ‘Can’ and ‘may’ are what are known as modal auxiliary verbs in English, a category of grammar that causes problems for learners.

There are two reasons for these problems:

2) Modal verbs in English have different meanings at different times, so it is a mistake to learn only one meaning.

Here we will look at the meanings of both ‘can’ and ‘may’, and then make a comparison between the two.

‘Can’ has two distinct meanings in English: ability and permission. It is vitally important to think about what meaning of ‘can’ is being used in any one sentence.

‘Can’ to express ability

‘Can’ as an ability is probably the first meaning that learners discover in English, and this then creates the problem that this is the only meaning of ‘can’ (which we already know to be untrue).

Here are some examples of ‘can’ meaning ability:

‘I can speak two languages.’

‘Can you work late tonight?’

All of these sentences are concerned with your ability (or inability to do something). It is important to understand that this ability is not always something personal, but also related to external factors. So, for example, perhaps you can’t work late tonight because you have an appointment, which is an external factor, rather than your own personal ability or skill (such as speaking a language or playing the piano).

‘Can’ to express permission

‘Can’ is also used to speak about permission, which could be self-prescribed, or due to external circumstances, such as formal rules. Here are some examples:

‘You can’t wear shoes in the house, my wife doesn’t like it.’

However, it is not considered totally correct to use ‘can’ to ask for permission. For example:

We will talk about this more in a moment.

‘May’ also has two meanings in English: to talk about possibility, and to talk about permission (like ‘can’). It is, therefore, this second meaning of ‘may’ (permission) that causes the confusion with ‘can’.

‘May’ to express possibility

‘May’, much like ‘might’ is used to suggest that there is a possibility that something will happen, but without confirming it. Here are some examples:

‘It may rain later.’

‘There may not be another opportunity to do this.’

However, notice that ‘may’ is not used to talk about personal actions. For example:

That is because the meaning of ‘may’ then becomes confused with the second reason that we use ‘may’, which is to expression permission.

‘May’ to express permission

‘May’ is typically used to talk about permission to do something. Here are some examples:

In is in this last instance that ‘can’ would be used more informally to have the same meaning.

Comparing ‘can’ and ‘may’

So, let’s take a look again at the way we would ask for permission in English. In such instances it would be better to use ‘may’ so as not to confuse the meaning of ‘can’ as an ability or as permission. For example:

‘I don’t know, can you?’ (asking if you have the ability to smoke)

‘Yes you may’ or ‘No you may not’ (Giving permission)

However, in reality, English speakers would use ‘can’ in the above example with the same result:

‘Yes you can’ or ‘No you can’t’ (Giving permission informally)

It therefore all comes down to context, and who your audience is. The reality is that, in informal settings (with friends, for example), ‘can’ is very often interchanged with ‘may’ to ask for permission and to even express that the permission has been given.

However, technically speaking, and therefore in a more polite or formal environment, it would always be better to use ‘may’ to ask for permission, and to express that permission has been given or denied.

That’s why these two words ‘can’ cause problems, or is that ‘may’?