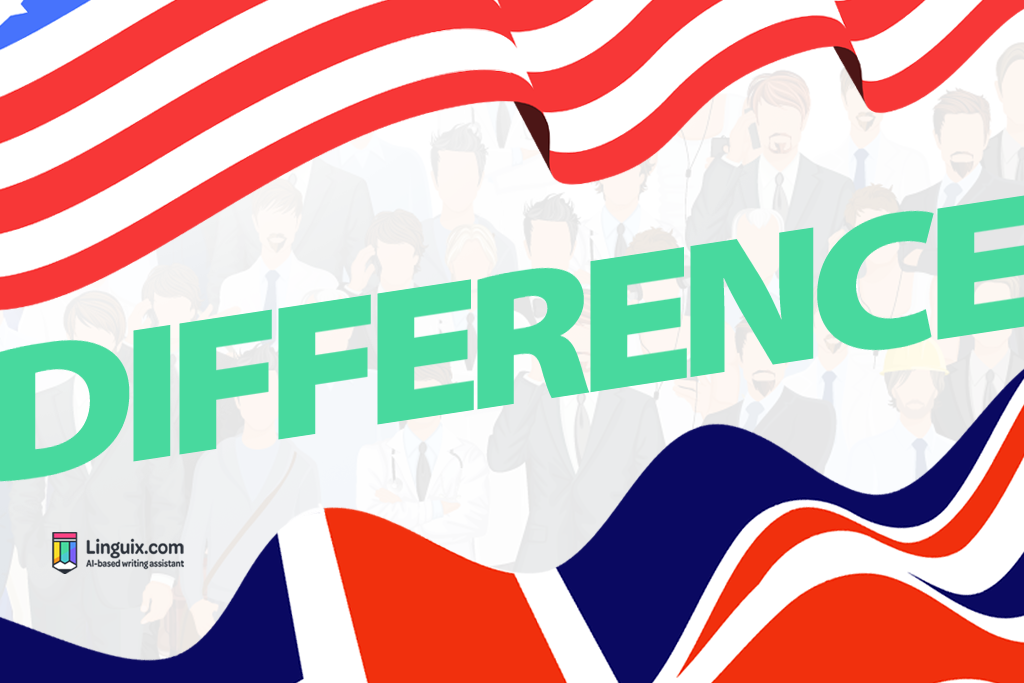 Yes and no. Although the standard rules of English, such as the grammar, are almost the same, there are a few different tendencies in British and American English when it comes to both grammar habits, vocabulary, and spelling

It is important to say that both the British and American versions of English are totally correct to use, but it is always better to be consistent and to satisfy your audience. So, if you are living and working in the United States, it would make more sense to use American rules there, for instance.

That said, many of the grammar differences that we will see here are really just differences in habit and vocabulary more than anything else.

And in terms of spelling, the differences are minor. Here is how British English and American English differs:

In British English, the forms of the verb ‘get’ are get / got / got.

In American English, it’s get / got / gotten

In both British English and American English, the forms of the verb ‘forget’ are forget / forgot / forgotten.

No one is right, of course, but the Americans show a little more consistency here. So, here are examples of how the different forms would be used in both Britain and the United States.

British English – ‘Have you got my letter yet?”

American English – Have you gotten my letter yet?”

There are a number of regular verbs (verbs that end in ‘ed’ in the past form) in British English that are changed to a simple ‘t’. In American English, they maintain the ‘ed’ ending. For example:

Present perfect Vs past simple

Present perfect exists in America (of course it does, Americans speak English after all), but there is much less of a tendency to use it. Here are some examples of where a British person would use present perfect, while an American would resort to past simple.

British English – ‘Have you seen the new Star Wars movie yet?’

American English – ‘Did you see the new Star Wars movie yet?’

Technically, the British version is correct, but technically what should be correct is what the majority of people use. So, let’s just say that both forms are acceptable.

There are a few verbs in British English that would never be used transitively but are in the United States. And then the opposite is true too.

What does this all mean?

With many verbs that are intransitive, a preposition can then be used to attach an indirect object. For example:

Here are some examples of verbs that are used differently in British and American English:

American English – They agreed on the price. (Intransitive)

British English – She wrote to me. (Intransitive)

American English – She wrote me. (Transitive)

In English there are two forms of the possessive:

It’s much less common in American English to use the second form.

These two forms can also be used to express obligation. For example:

Once again, while both forms are common in British English, the Americans shy away from the second.

Shall and shan’t probably sound very old fashioned to Americans, and indeed that is how British people’s language can seem to their American cousins. Here are how these modal verbs would be used by Brits (and what the Americans would say in contrast).

Americans would only use the word ‘shall’ for requests (the British do this too), but again it is unusual. For example:

‘Shall I carry that for you?’ – possible in American English, normal in British English

‘Would you like me to carry that for you?’ – common in both American and British English

There are only really three main differences between British and American spelling. They are as follows (with the British spelling always first):

1) centre / center (and other words that have this combination of letters, such as theatre / theater)

2) labour / labor (and other words that have this combination of letters, such as colour / color)

3) realise / realize (and other words that have this combination of letters, such as socialise / socialize)

Other spelling variations do exist, but they are mostly too random to attribute rules to.

If you are concerned that you are not going to spell the word correctly, then using a writing tool such as that developed by Linguix can help you. Linguix’s AI-powered assistant also allows you to choose your language version, therefore offering the correct fixes as and when they are required.

What else can you do to help learn the difference between British and American English?

Do all the things that you would normally do to improve your English, but when reading, listening and watching movies/TV shows, etc., pay attention to whether British or American English is being used.

An accent is, of course, a big difference between British and American English, but being able to understand clearly just comes down to familiarity and practice.