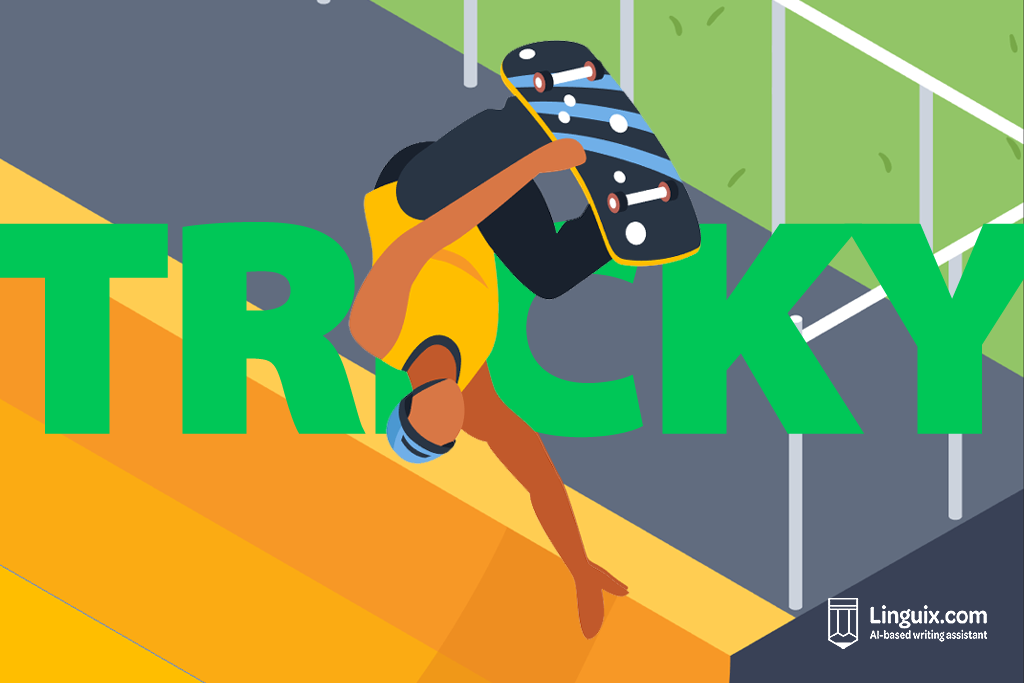 English has more than its fair share of all three of these things. Let’s have a look at some of the most troublesome examples of tricky words and punctuation in English, and look at ways to avoid making those mistakes in the future.

Think carefully about what apostrophes do. Most of the time they replace a missing letter, or they express possession.

About the only exception to that rule that you need to know is when you are using ‘its’ for possessions. As you will see here, there is no apostrophe.

Because if you did, it would be confused with the abbreviation of ‘it is’, when the apostrophe represents the missing ‘i’. Hence. ‘it’s’.

What is its name?

It’s true, then, that you would use an apostrophe plus ‘s’ in all other cases where there is a missing letter or a case of possessive. For example:

That is mum’s car.

Now, of course, in context there is no way that you could confuse the meaning of the first ‘mum’s’ = ‘mum is’, and the second = the car belongs to mum.

This one can cause a few issues, but it all boils down to whether you what to use a subject pronoun or object pronoun.

He is the man who lives next door. (Who is he?)

But in reality, whom is nearly always replaced with ‘who’, and this is accepted practice, so the second sentence above could be:

He is chatting to a girl who he knows from work.

This is a really easy one to solve. ‘Affect’ is the verb, and ‘effect’ is the noun. That’s it! Here are some examples:

How does working there affect your health? (verb)

Working there has had many negative effects on my health. (noun)

Yes, of course, you can. Even in formal writing. It’s interesting that this seems to have become a rule, because it has never, in fact, been a rule. Don’t start every other sentence with these words, but every now and again it’s fine. It’s also quite literary too, so outlawing it would basically deny nearly every great writer there has ever been in the English language.

‘And what are you reading, Miss –?’ ‘Oh! It is only a novel!’ replies the young lady: while she lays down her book with affected indifference or momentary shame.

‘But the Emperor has nothing on at all!’ cried a little child.

Should I use an ‘Oxford comma’?

An ‘Oxford comma’, so-called because it is a rule of the Oxford University Press, is when you use a comma before the final ‘and’ in a list. Here is a simple example:

I like to eat pizza, pasta, fish, and chips.

Here the Oxford comma is seen after the word ‘fish’. The other commas in the list are known as serial commas and are always correct.

The problem with omitting the Oxford comma is that it can change the meaning of what you are trying to say.

I like to eat pizza, pasta, fish and chips.

The point is that, by omitting the Oxford comma, you can make a sentence ambiguous. So it is always much better to use it because it leaves no doubt that those items are separate. And it is far from only the Oxford University Press that prescribes this comma. The vast majority of style guides do that.

So, should you use an Oxford comma? Yes!

When do I use a hyphen?

A hyphen should be used to connect two words that are acting together as one word.

That is nearly always true in adjectives that are comprised of two words. For example:

However, do not use the hyphen when the first word is an adverb:

However, when it comes to nouns, there are just no rules. The tradition is that these words tend to start out as two words, slowly evolve to include a hyphen over time, and eventually become one word. Who makes this decision? That’s a complicated question: too complicated to answer here.

The best advice with nouns? Check a dictionary. But even then you may find some differences of opinion

But here are some more examples of when you should use a hyphen:

Anti-inflammatory, self-absorbed, ex-girlfriend (with some prefixes, including always with self and ex)

My uncle had a concealed-weapons permit. (to avoid ambiguity. Removing the hyphen here could change the meaning)