9 Common Mistakes to Avoid in English 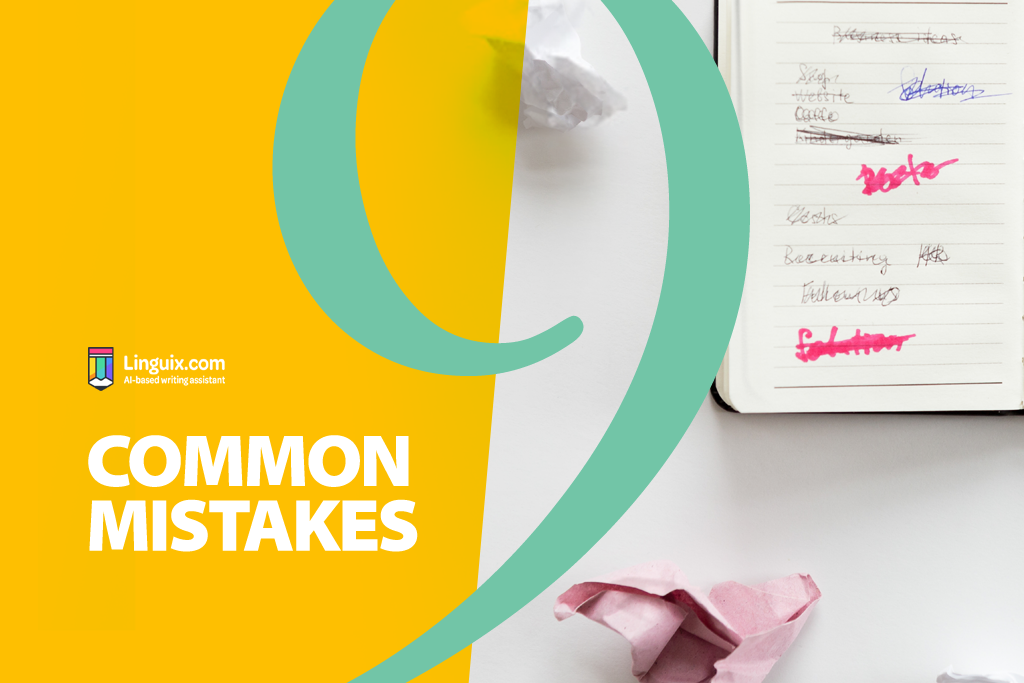 As a non-native speaker of English (meaning that English is a second language for you, something you have learned) it is easy to make mistakes. And that’s okay. Of course it is! No one expects your English to be perfect (most native speakers cannot boast this in any case), and most of the time people are actually inspired by the level of proficiency you have in a language which is not your mother tongue. So be confident, and be proud of your ability.

Language is used to communicate, so no matter what your level of English, just keep speaking.

However, there may be typical mistakes that you make. Again, that’s okay, but here are just a few things to look out for:

This is a common mistake in English. Unlike ‘for’, which can be used with nearly all English tenses, ‘since’ can only be used with the present perfect and past perfect tenses, with the former being more common. Let’s give an example:

“I have been living in London for seven years.”

Clearly these two sentences express exactly the same idea, but ‘for’ is used to express the duration of time (seven years) whereas since is used to convey when the action began (2012). The result is the same, but these two words, ‘for’ and ‘since’, cannot be interchanged. So, avoid…

“I have been living in London since seven years”. – Mistake

Unlike in many other languages, English tends to put the currency before the number, so five dollars would be written like this:

Obviously, we say five dollars, and that is what we would write when spelling the words, but with the currency symbol, put it before the number.

Then, when expressing thousands and millions, as well as decimal points, we use the totally opposite system of commas and decimal points (compared to many other languages) to do this. So, in English…

In English, the rules for capitals are strict. We use them at the beginning of a new sentence, and for what we call ‘real’ nouns, meaning names of people, places, companies and organizations (Victoria, France, Apple, the United Nations, etc.). Other than that, the only other exception is the pronoun ‘I’. There are really no other major instances where a capital letter would be used. Notice how that differs from your language, and don’t confuse the rules.

These two words, along with their structure, cause all manner of problems, mostly because they don’t translate too well. Note that direct translation is the cause of the majority of language mistakes.

Lend and borrow are actually the same action, just told from different perspectives. It only matters who is the subject of your sentence, and who is the object. Let’s look at an example.

Tom has money. Sarah doesn’t. Sarah needs Tom to give her some money, which she will then pay back to Tom. In this case:

A: “Tom lends Sarah some money.” But,

B: “Sarah borrows some money (from Tom).”

But they express exactly the same concept, so you can use whichever form you wish. This often causes issues in asking the question, but note again that you can use either form:

Often the correct verb tense in English is dictated by the time word. The time word can be placed at the beginning of the clause (the subject + verb idea) or at the end of it. So, for example:

“I went to the park yesterday.” Or…

“Yesterday, I went to the park.”

Problems arise when the time word does not suit the verb tense. Here are a couple of examples:

“I wear a shirt tomorrow.”

“I’ve been to Spain last year.”

In both of these examples, the verb tense (present simple and present perfect, respectively) is not suitable to the time word (tomorrow and last year). First of all, it is important to learn which time words suit which tenses (most of these are obvious). Secondly, it is a good idea to put the time word at the start of your clause, and in this way you can let the time word dictate your verb tense accordingly.

For example, in this sentence…

“I have been to Spain last year.”

It is likely that you began speaking intending to inform the other person that you have, in fact, been to Spain, but suddenly you decided to tell them when as well. But because you had used the present perfect tense, you could not add a time word at all (saying how many times would be fine, however!).

“I have been to Spain. I went last year.”

Last year needs a past tense, of course. However, if you get in the habit of using the time word first, you can avoid these mistakes.

Now all you can do is use the past tense. This helps with reducing these types of tense and time word complementation mistakes.

Any confusion here is what we would call a subject-verb agreement mistake. For example,

This mistake is also typical with single and plural nouns and the verbs ‘is’ or ‘are’. For example:

And of course, when using plural nouns, the verb form should always be ‘are’. For example,

This is another typical mistake usually caused by translation. Countable nouns in English are simply nouns that can be pluralized. For example;

And then, of course, you must be careful with the complementation.

“Information is…” (never are).

The positions of adverbs

However, the most common form of position for adverbs in English is in what is called ‘mid’ position – between the subject and the verb. For example,

“I always eat porridge for breakfast.” (Not, “Always I eat…”)

If there is an auxiliary verb, put the adverb between the auxiliary and the verb. For example,

And when the sentence is in the negative form, that can change the position too, so…

“I probably won’t go to the party.”

The verb ‘to be’ can also cause the position of the adverb to change.

“I am always hungry in the morning.” But, “I always eat porridge for breakfast.”

The best thing to do is to take note of example sentences, and copy the structure.

False friends are words that look incredibly similar to words in your language, but in fact have a different meaning. For example:

The word ‘librería’ in Spanish would translate into English as ‘bookstore’, not ‘library’, which is a place where you can borrow books (or they lend you books!).

The Italian word ‘parente’ means ‘relative’ in English (a member of your family), not ‘parent’, meaning mother or father.

The French word ‘eventuellement’ is the same as ‘possibly’ in English, not ‘eventually’, which means after a long period of time.

You can see how you might get into trouble by seeing an English word that looks like a word in your language and assuming it is the same. You can’t buy books in a library, for example.